Fig 1: The boxes on the left show the profiles of permitted emission lines in the GIARPS spectra for six stars. The right panel shows the plot of the accretion luminosity, Lacc, as a function of the different accretion diagnostics as labeled (blue dots). The agreement of the Lacc values as derived from different line diagnostics is very good.

The mass-accretion rate is a crucial parameter for the study of the evolution of accretion discs around young solar-mass stars, and has an important impact for planet formation studies. The Taurus star forming region is rich in young stars, most of them of the T Tauri class, and many with a mass close to Solar. A variety of methodologies have been used in the past to measure mass accretion in samples of stars in Taurus, but despite being a general benchmark for star and, nowadays, planet formation studies, a comprehensive and systematic analysis of the Taurus T Tauri population, where the physical stellar and accretion properties are derived homogeneously and simultaneously, is still missing. To cover this gap, a pilot study of the stellar and accretion properties of seven very young stars in Taurus was carried out within the framework of the GIARPS High-resolution Observations of T Tauri stars (GHOsT) project.

The pilot study, led by Juan Manuel Alcalà, is a presentation of the specific methodologies developed by the GHOsT team to derive stellar and accretion properties in a self-consistent way. This has been possible using the spectroscopic features gathered in the wide-band GIARPS spectra, from the optical to the near-IR, combined with the continuum excess emission due to the mass accretion from the circumstellar disc onto the star. Ancillary contemporaneous photometry and low-resolution spectroscopy could be used. The analysis of the the continuum excess emission of the GIANO-B spectrum also allowed the GHOsT team to investigate the near-infrared emission from the inner region of the circumstellar disc, within ~0.2 AU from the central star, and then constrain its size.

The GHOsT pilot paper puts in context the physical properties of the seven stars in Taurus and discusses their accretion properties in comparison with stellar samples in other star forming regions, as well as the possible physical mechanisms for the origin of the continuum excess emission in the near-infrared. These procedures and methodologies will be adopted in future works for the analysis of the complete GHOsT data set, while the synergy of the GHOsT project with the ALMA surveys of the stellar nursery in Taurus will shed light on the relationships between the properties of the dusty circumstellar disc and the physical parameters of the central stars.

GHOsT (PI. S. Antoniucci) is an important part of the PRIN-INAF2019 “Spectroscopically Tracing the disc dispersal Evolution” (STRADE; PI J. M. Alcala’) and it is conducted in the framework of the JEDI (JEts and Disks at INAF; https://sites.google.com/inaf.it/jedi ) collaboration. 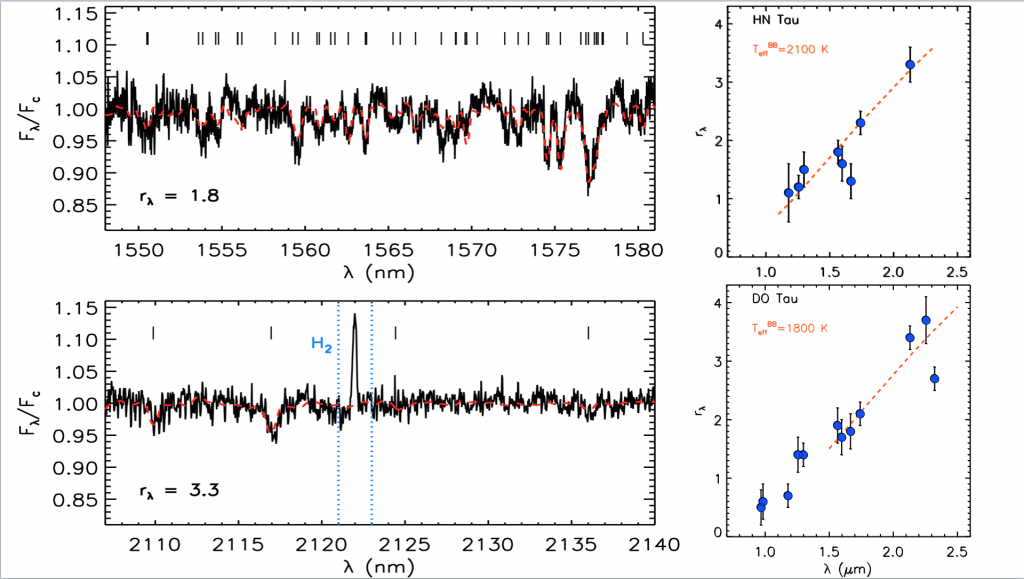 Fig 2: The left panels show two portions of the normalized GIANO-B spectrum of HN Tau A (black solid line). The red-dashed line is a spectral template, appropriately modified to estimate the continuum excess emission, or veiling r_l, in the NIR. The r_l value, minimizing residuals with respect to the template, is indicated in the lower left. Some absorption features, mainly of the iron-peak group, are indicated with small vertical lines. The H2 emission line is also shown between two vertical dotted lines. The right panels show the veiling r_l as a function of wavelength for two objects (blue dots). A black-body fit to the data is shown with dashed lines, and its temperature is labelled. This information can be used to constrain the size of the emitting region in the inner circumstellar disc of the objects.