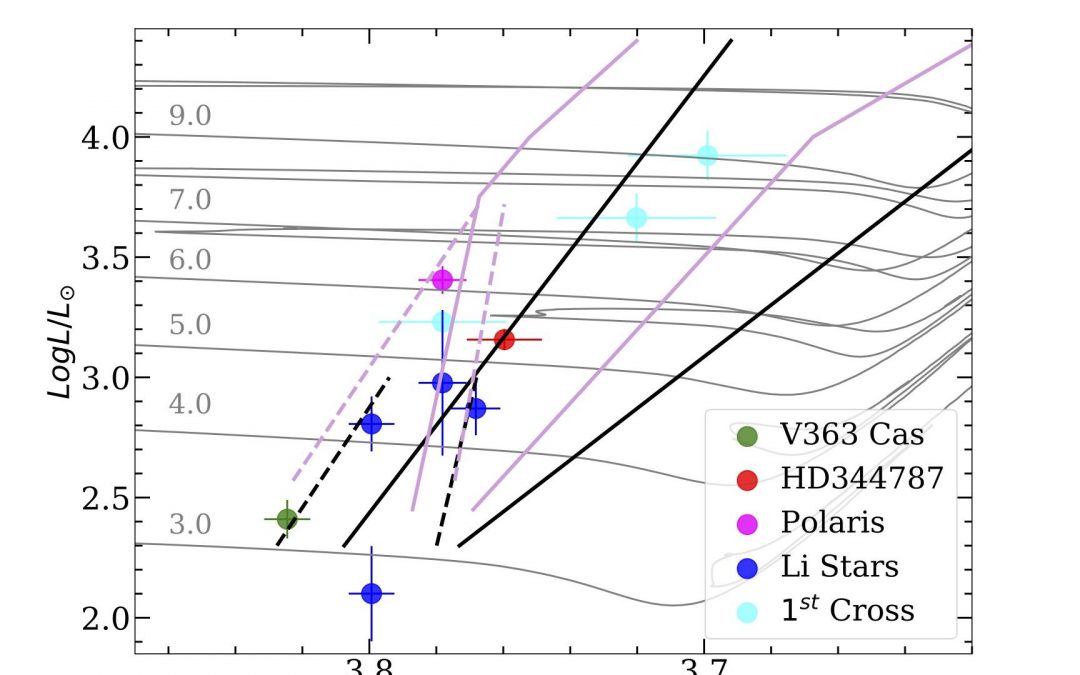 Classical Cepheids (DCEPs) are the most important primary indicators for the extragalactic distance scale, but they are also important objects per se, allowing us to put constraints on the physics of intermediate-mass stars and the pulsation theories. We have started a long term project, (C-MetaLL: Cepheid – Metallicity in the Leavitt Law) led by Vincenzo Ripepi (INAF-OACN) and Giovanni Catanzaro (INAF-OACT), devoted to the study of the dependence of the DCEPs period-luminosity relations on the metallicity, a debated matter of high relevance in the context of the extragalactic distance scale.

In this context, spectra with HARPS-N@TNG for about 50 DCEPs were acquired in the last two years, with the goal to measure accurately their chemical abundances. In the course of this project, two peculiar DCEPs were discovered, namely V363 Cas and .

Analyzing the HARPS-N spectra of V363 Cas, a lithium abundance of A(Li) = 2.86 ± 0.10 dex was detected, along with iron, carbon, and oxygen abundances of [Fe/H] = −0.30 ± 0.12 dex, [C/H] = −0.06 ± 0.15 dex and [O/H] = 0.00 ± 0.12 dex. V363 Cas is therefore one of the rare (the fifth) Milky Way DCEPs to exhibit a Li-rich feature. An analysis of historical time-series spanning a hundred-year interval shows that the period of V363 Cas is increasing, with a sharp acceleration after HJD=2453000. All the observational features can be explained if the star is at its first crossing of the instability strip, i.e. it has not passed yet the first dredge-up, which is expected to destroy completely lithium and modify the CNO abundances, bringing to the surface CN-cycle processed material.

HD 344787, which is known to exhibit the fastest positive period change among DCEPs along with a quenching amplitude of the light variation, is considered an analog of the most famous and mysterious DCEP in the MW: Polaris. High-resolution spectra obtained with HARPS-N@TNG for HD 344787 and Polaris were used to infer their detailed chemical abundances.

They revealed an almost solar abundance and no depletion of carbon and oxygen for HD 344787. Hence, the star appears to have not gone through the first dredge-up. Similar results are obtained for Polaris. Therefore, both Polaris and HD344787 are confirmed to be both most likely at their first crossing of the instability strip.

A comparison of the properties of V363 Cas, HD 344787, and Polaris with other DCEPs which are also thought to be at their first crossing (additional four DCEPs showing Lithium and three with high rate period increase) allows us to speculate that the differences we see in the Hertzsprung-Russell diagram (see Figure) might be due to differences in the properties of the DCEP progenitors during the main sequence phase.